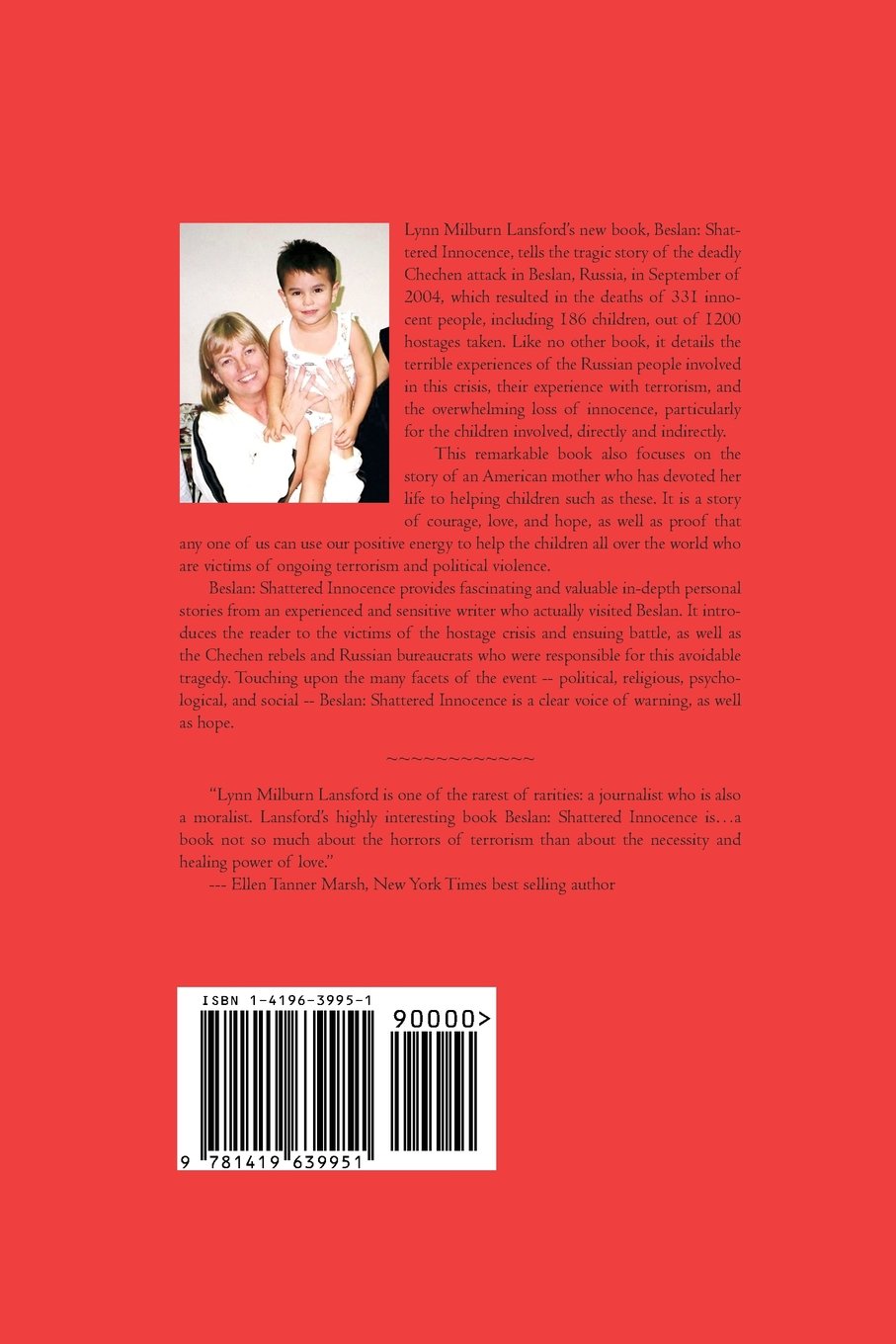 Larisa had spent the first hours of captivity tending to Vadim Bolloyev, a father who had been shot near the right shoulder.

He lay on the basketball court silently, holding in his pain. His white shirt was soaked red. He was growing weak. Larisa urged him to lie back and placed her purse under his head. She inspected his wound. The bone had been shattered. Blood flowed freely. She tried using a belt as a tourniquet but could not position it. Sweat beaded his forehead. His son, Sarmat, six, sat beside him in a white shirt and black vest, watching his father slip away. Larisa had not wanted to come to school that day.

Her six-year-old son, Zaurbek, was starting first grade, but she had asked Madina, her nineteen-year-old daughter, to bring him. Her husband had died of stomach cancer in April.

She was in mourning and felt no urge to celebrate. But after they left, Larisa looked outside at the crowds moving to the school. Go with them, a voice told her, and she rushed to her balcony.


Now she leaned over a bleeding man, struggling to save him. Her daughter was enrolled at a medical academy. He needs an operation. 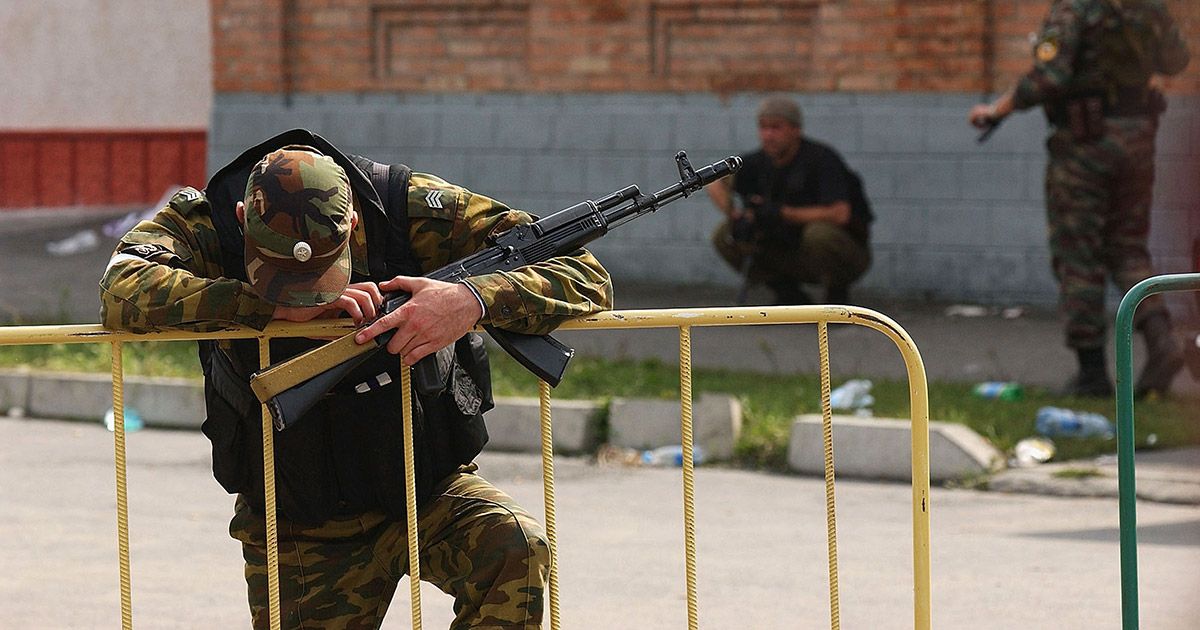 Bolloyev grabbed her shirt. Larisa slipped free and stood, and the terrorist shoved her with his rifle toward a corner where confiscated cameras and phones had been piled and smashed. For a moment they faced each other, the terrorist and the mother, locked in mental battle. She looked into his mask; freckles were visible near his eyes. A hush fell over the gym. The hostages had seen Betrozov's murder.

Now came Larisa's turn. The terrorist raised his Kalashnikov, past her chest, past her face, stopping at her forehead. He pressed the muzzle against her brow. Larisa felt the circle of steel on her skin. Bolloyev propped himself on an elbow. Larisa's children looked on. She reached up, grasped the barrel, and moved it away. The terrorist paused. Thinking quickly, she tried to convince him that Ossetians were not enemies of Chechens, a difficult task, given that enmity between Ossetians, a Christian people with a history of fidelity to Moscow, and the Islamic Chechens and Ingush, who have long been persecuted, is deep.

The word stung. Kadyrov -the surname of former rebels who aligned with Russia and became the Kremlin's proxies. The separatists despised them with a loathing reserved for traitors. Larisa was stumped. Abdullah had been rushing across the gym; he stepped beside them.

Abdullah studied the two: his young gunman, the woman who stared him down. She pointed to his bloodied arm. Go back and sit down and shut up.

Have you read these stories?

Larisa returned to her place. Her children stared at her. Bolloyev lay back down. His lips were violet, his forehead coated in sweat. His death could not be far away. She was enraged. Zalina Levina could not console her granddaughter, Amina, and did not know what to do. She had stripped the pink skirt and red shirt from the toddler's sweaty skin.

It was not enough. Amina cried on, filling Zalina with dread. The terrorists had grown more irritable, and their threats were multiplying. Zalina worried the child would be shot. Zalina knew Chechnya firsthand, having lived in Grozny, its capital, before the Soviet Union collapsed. She remembered its mountain vistas and orderly atmosphere. The city had industry, a university, an oil institute, a circus, a soccer stadium, and rows of apartment buildings on tree-lined streets.

She also remembered its brutality. Nationalism had sprouted anew as Moscow's grip weakened. Old animosities reemerged. In the early s, before the first Chechen war, a group of Chechen men had stolen her brother-in-law's car. Zalina thought she had escaped the war. Now Amina kept crying and Zalina's anxiety grew.

There seemed no reason for hope. The terrorists were demanding a withdrawal of federal troops from Chechnya, and if the hostages knew anything about Vladimir Putin, Russia's president, they knew he was unlikely to do this. Putin's success rested in part on his reputation for toughness.

He was not one to grant concessions, certainly not to separatists, for whom his disdain was well-known. As they waited, the hostages were miserable in the heat. The gym was too crowded to allow for much movement, which forced them to take turns extending their legs. Others leaned back-to-back. The terrorists gave little relief.

Sometimes they made everyone display their hands on their heads, fingers upright, like rabbit ears. Other times, when the gym became noisy with crying children, they selected a hostage to stand, then warned everyone: Shut up or he will be shot. But silence, like a federal withdrawal, was an almost impossible demand. Children can stay quiet for only so long. Amina cried and cried. I have to save this child , Zalina thought.